"Eight long years after President Obama's ill-fated push at regime change, U.S. troops are still on the ground in Syria. More than half a million people are dead, hundreds of thousands are terribly injured, and millions more Syrians are displaced." pic.twitter.com/Rwao9HNbIA

Greetings Rick, In The Love & Light of The One Infinite Creator!

Nuclear-powered drills & neutron bombs are the primary methods used to create & dig these DUMBS underground.The drills go through rock at speeds up to 60 mph, literally melting the rock away to form a smooth glass like surface around the edges of the tunnels.

The nuclear-powered machines are called Subterrenes (rhymes with submarine).  The nuclear Subterrenes build tunnels up to 40’ in diameter; as they work the rock it is melted into a hard, glassy tunnel lining.Fully filtered air-intake shafts bring fresh air to the tunnels & underground facilities.  Many of the underground sites are close to railroads, airports, seaports& have entrances trucks can drive into as well as ships & submarines can sail into.Some of the entrances for trucks are protected by holograms that look like the side of a mountain but allow vehicles to just drive through them.The other style of hidden entrances are buildings where trucks drive in and are lowered via access shafts down into the underground areas.Security for facilities vary from Wackenhut to Homeland Security & others.  Penetration tests on facilities are carried out by special units called OP-06-D.

Links to DUMB listings by state, see links below:

See the story in its entirety here: Some Underground Bases Listed by State by Don Croft

COMPLETE LIST of Military Underground Bases in USA – The …

This 8-minute video is well worth watching & reveal great inside views of DUMBs:

look especially at 4:48- ocean connections too!

There are also many Deep Underground Military Bases under Canada.  Almost all of these bases are over 2 miles underground and have diameters ranging from 10 miles up to 30 miles across!

They have been building these bases day and night, unceasingly, since the 1940s. 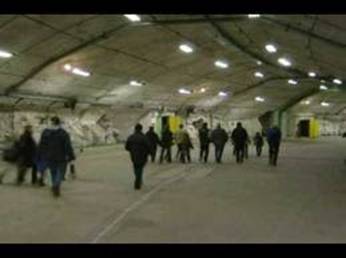 My name is James Casbolt.  I worked in MI6 covert cocaine trafficking operations with the IRA in London between 1995 & 1999.My father Peter Casbolt was also MI6 & worked with the CIA & mafia in Rome in 1993 on covert cocaine & heroin trafficking operations.The global drugs trade run by many factions of the global intelligence community co-operating together (MI6, CIA, MOSSAD etc.) is worth at least £500 billion a year.  This is more than the global oil trade.

MI6 controls many of the other intelligence agencies in the world.  MI6 created the CIA in 1947 & still control them today.This ‘black ops’ drug money or in classic Orwellian terms, MI6/CIA ’non-appropriated funds’ is being used to fund government and military projects classified ‘Above top secret’.

These operations include a huge worldwide cover up of the building & maintaining of deep underground military bases (DUMBS).

5- The Snowy mountains in Australia

6- The Nyala range in Africa

7- West of Kindu in Africa

8- Next to the Libyan border in Egypt

And many other places…

Paulding County, Georgia, is said to be the central location of the project. Yorkville, Georgia is to be a terminus of sorts for the hubs.

Wal-Mart’s involvement in the project has not yet been officially commented on, but it is generally perceived that Wal-Marts in these areas are staging areas for the tunnel project & FEMA camp personnel holding & Transfer.

Feb. 8, 2004. Editor’s Note: Phil Schneider used to work for the government and was involved in the construction…
COMPLETE LIST of Military Underground Bases in USA – The …

THE ESCAPE FOR THE STARS & PERSONS OF POWER

Not just a shelter, but a year-round ‘survival resort’

Atchison, Kansas, June 13, 2013 – A massive underground complex encompassing over 2 million square feet is now being outfitted as the largest private shelter on Earth.

The latest in a network of shelters built by The Vivos Group, this ‘Ark’ is also the first of its kind, being dubbed the Vivos Survival Shelter & Resort

How The Super-Rich Plan To Survive The Apocalypse

Most people have too much on their plates to worry about what will happen when the world ends. But then there…”Super-Rich Plan To Survive Apocalypse In Underground Luxury Condos”
EVEN IRAN HAS BEEN BUSY AS BEES TUNNELING UNDERGROUND.
YES, WE HAVE SPY EYES ON IRAN, NATURALLY! 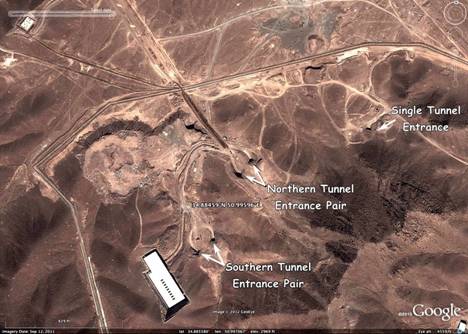 GOOD SHOT FROM HIGH ABOVE IRAN!
WAY TO GO, TEAM! 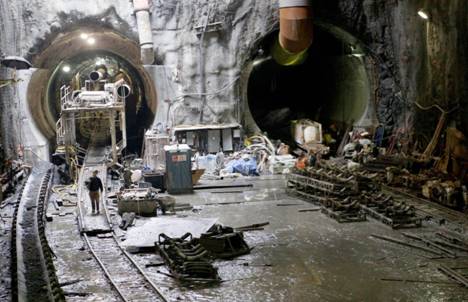 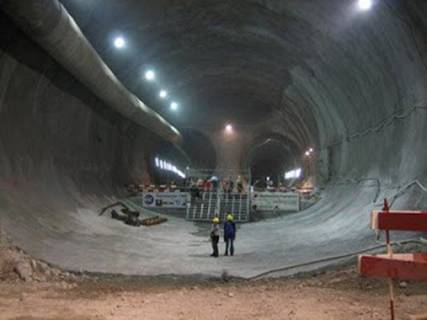 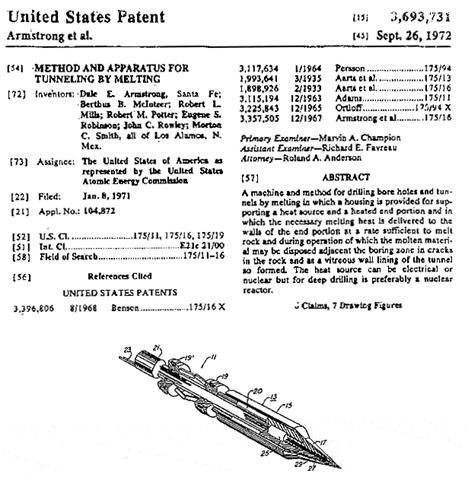 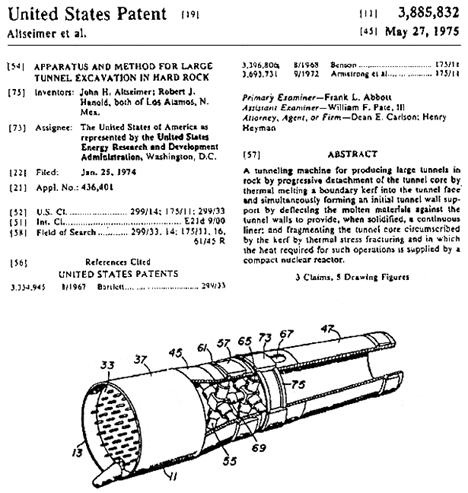 See full information of this patent: U.S. Patent No. 3,885,832 dated May 27, 1975
There have been other patents for nuclear powered drilling machines, earlier than the ones shown above:

Nuclear powered drilling method and system US 3280923 A

The entire drilling system is suspendible [SIC] on a nonconductor type cable, which eliminates need for the heavy drill string and permits use of a small, inexpensive drilling rig.

No rotary table is needed in this drilling system, and it generates its own power down-hole for operating the drill bit, for circulating fluid for drilling, and for other operations to be described later in more detail.

At the surface, only a small pump is required to adjust the drilling fluid density and to add mud to the well bore as drilling progresses. High speed round trips to change bits are possible since the only limitation is the horsepower used to operate the cable drum. Finally, because of the simplicity of the surface equipment, only a small operating crew is needed.

This one is issued just a few days before the Los Alamos second patent: 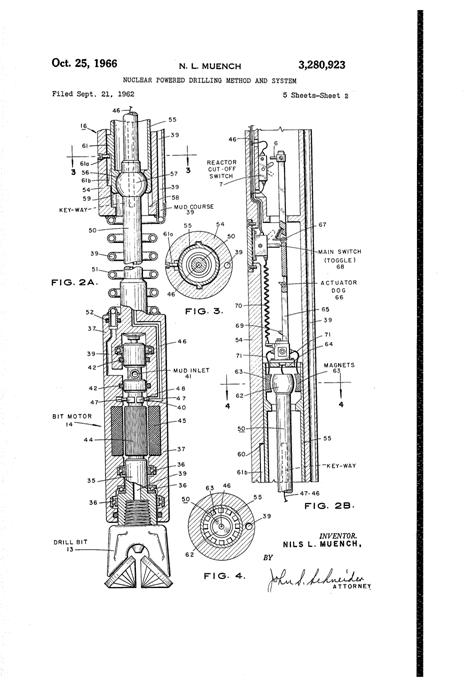 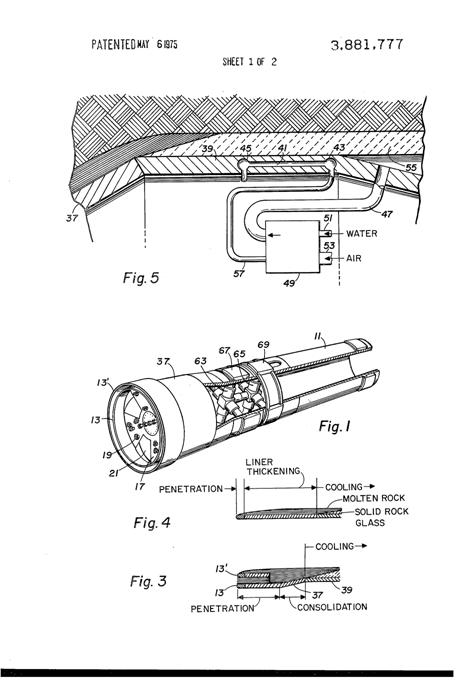 The Subterrenes melting penetrator head can be of any shape desired.

This unit does Rapid Excavation by Rock Melting

melting through a ring of rock in front of the machine. The motive power to push the Subterrene through the ground is provided by gravity.

REUTERS PICKED UP ON THE BILLION DOLLAR PROJECT AGAIN IN 2013, BUT LOOK AT THOSE OLD BREAKABLE DRILL BITS AGAIN!

Jan. 8 – A Japanese-led project aims to drill to the Earth’s mantle, a 3,000 kilometre-thick layer of slowly def…
SUBTERRENES:

In 1972, Robert M. Salter, lead scientist for the Rand Corporation, announced during an interview with LA Times science writer George Getz, that a high-speed system could be built using existing (1972) technologies.  He also stated that the system should be built for environmental and economic reasons.  What kind of speeds was he talking about?

1 In you, Lord, I have taken refuge; let me never be put to shame; deliver me in your righteousness.

2  Turn your ear to me, come quickly to my rescue; be my rock of refuge, a strong fortress to save me.

3  Since you are my rock and my fortress, for the sake of your name lead and guide me.

4  Keep me free from the trap that is set for me, for you are my refuge.

5 Into your hands I commit my spirit; deliver me, Lord, my faithful God.

13 For I hear many whispering, “Terror on every side!” They conspire against me and plot to take my life.

15  My times are in your hands; deliver me from the hands of my enemies, from those who pursue me.

16  Let your face shine on your servant; save me in your unfailing love.

18  Let their lying lips be silenced, for with pride and contempt they speak arrogantly against the righteous.

19  How abundant are the good things that you have stored up for those who fear you, that you bestow in the sight of all, on those who take refuge in you.

21  Praise be to the Lord, for he showed me the wonders of his love when I was in a city under siege.

22  In my alarm I said, “I am cut off from your sight!” Yet you heard my cry for mercy when I called to you for help.

23  Love the Lord, all his faithful people! The Lord preserves those who are true to him, but the proud he pays back in full.

24  Be strong and take heart, all you who hope in the Lord.

In Your Name Almighty God Of All Love, Light, Compassion & Creation

In The Name of YOUR SON

Protect us & our families, our brave Patriot Military throughout the World, The Great Q-Alliance, Our POTUS & His Family & ALL those here.

We ask you to raise us up

YOUR True Army of God

and for us to see the truth or your word and to have discernment of those that are evil & blaspheme your name & take up battle against your children, your law, your kingdom and YOUR creation!

WE Humbly ask this of you

Your servants and devout followers.

God of All Creation

and In The Name