"Eight long years after President Obama's ill-fated push at regime change, U.S. troops are still on the ground in Syria. More than half a million people are dead, hundreds of thousands are terribly injured, and millions more Syrians are displaced." pic.twitter.com/Rwao9HNbIA

Greetings Rick, In The Love & Light of The One Infinite Creator!

Nuclear-powered drills & neutron bombs are the primary methods used to create & dig these DUMBS underground.The drills go through rock at speeds up to 60 mph, literally melting the rock away to form a smooth glass like surface around the edges of the tunnels.

The nuclear-powered machines are called Subterrenes (rhymes with submarine).  The nuclear Subterrenes build tunnels up to 40’ in diameter; as they work the rock it is melted into a hard, glassy tunnel lining.Fully filtered air-intake shafts bring fresh air to the tunnels & underground facilities.  Many of the underground sites are close to railroads, airports, seaports& have entrances trucks can drive into as well as ships & submarines can sail into.Some of the entrances for trucks are protected by holograms that look like the side of a mountain but allow vehicles to just drive through them.The other style of hidden entrances are buildings where trucks drive in and are lowered via access shafts down into the underground areas.Security for facilities vary from Wackenhut to Homeland Security & others.  Penetration tests on facilities are carried out by special units called OP-06-D. 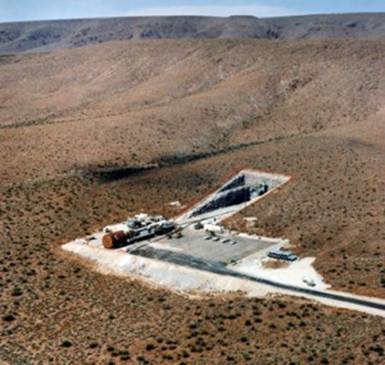 The second lower better maintained dirt road West, right going North at the power lines up to the hilltop, where you will see the top of the underground NORTHOP facility:

Technology for Illuminati secret projects.  This facility is near the Tehachapi Mtns.  Reported to go down 42 levels.  It is heavily involved with electronics & hi-tech aerospace research.

Battle for control in progress.

One can see it better from the Three Sisters Hills to the south of the facility.  It is involved in hi-tech aerospace technology.

There are acres of fenced-in areas which have barbed wire pointing into the area to keep people in, & small concrete stacks that resemble mini-cooling towers rise out of the acres of nowhere to vent underground levels & exhaust for crematoriums.

The Denver complex is larger than the city above & is meant to be the New D.C. complex.  All factors of government are here for transition upon WWIII start.

This is the main hub for ALL U.S. facilities & is tied by MAGLEV trains that average 17,000 mph to ALL other units, World-Wide.  Has massive Mk Ultra facilities with many Delta Orion teams with end-time programming.

Storage of all supplies necessary to support 1 million for 150 years.  It has a large lake as well as parks with full flora & fauna many miles in diameter, powered by 2 fusion reactors as well as tied to the free energy Earth Tesla grid system.  The underground facility goes to 88.3 miles deep & is basically 8 cities on top of each other. 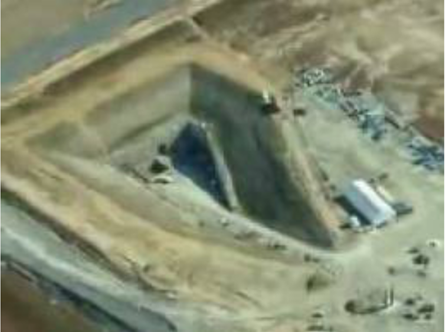 76.–78. Atlanta–FEMA regional center, placed since Atlanta was to become a capital for one of the 10 regions within the NWO redrawing of boundaries.  Atlanta has 3 underground installations in its area:

One to the north at Kennesaw Mtn., Marietta, connected to Dobbins AFB & the one to the South of Atlanta at Forest Park.

When Martial Law was to come in America, the UNISF and UNMNTF (United Nations International Security Forces & United Nations Multi-National Task Forces) troops located in DUMBs, in the U.S. & Canadawere to be deployed to round up the millions of Americans whose names appear on the C_A Red List & the C_A Blue List.  These troops are Chinese, Russian, German, Polish, Japanese, Ukrainian, Saudi Arabian, Pakistani, Mexican, Honduran, Salvadorian, Chilean, Vietnamese, & other foreign trained military Mk Ultra Delta Forces.   Mass detentions in FEMA camps & the DUMBs, along with mass executions were planned to occur (see previous Gene decodeshowing FEMA cars & coffins).  A simple search of FEMA camps will show many converted WALMART & converted military bases for this purpose.  Current estimates for troop forces that were to be deployed is 6 million.

Under white hat control since 2017 nuclear missile launches on Hawaii.

A track runs through the middle of the underground facility.  Food & showers are on the tracks, the men are allowed showers once a week.

Minimum of lighting is used; the men are beaten senseless if they talk at all.  It sits 500′ underground.

Links to DUMB listings by state, see links below:

See the story in its entirety here: Some Underground Bases Listed by State by Don Croft

COMPLETE LIST of Military Underground Bases in USA – The …

This 8-minute video is well worth watching & reveal great inside views of DUMBs:

Let us pray for our valiant patriots fighting for our freedom & lives!

“But the salvation of the righteous is from the LORD; He is their strength in time of trouble.”

“In the day when I cried out, You answered me, and made me bold with strength in my soul.”

We Pray for strength & for victory of our brave military, may they triumph over this evil!  We pray for the safety & victory of our Brave POTUS & His family, for the Patriot Alliance that is saving humanity & the entire Earth!

Finally, we pray that you give all of us; the Army of God; to give us your protection & blessings in surviving this vast conflict, protect us, enlighten us & save us ALL.

We humbly as for these blessing from you;

The One True Living God of All Love Light & Creation

In the Name of Your Son

We thank you & glory in you Love, Light, Peace & Power