I hear that Fake News CNN just reported that I am isolated in the White House, wondering out loud, “when will life return to normal?” Does anybody really believe that? There was no leak, they made it up – they are CORRUPT & FAKE NEWS….

The LameStream Media is the dominant force in trying to get me to keep our Country closed as long as possible in the hope that it will be detrimental to my election success. The real people want to get back to work ASAP. We will be stronger than ever before!

For those who keep track of his banner photos, we got a new one. pic.twitter.com/GjnsLE0LNo

Go to google earth, go to Gitmo and click on the court building. What picture is shown????? BOOM!!! pic.twitter.com/2hFsaWwuhH

Omg ha! 😎💥 Go to GITMO on Google Earth and click on the Military Courthouse. Look what photo is linked to it! 👇🏼We are Q! pic.twitter.com/rO7q8zyZn4

By the numbers: How coronavirus compares with the flu, opioid overdoses. https://t.co/lGX29ApL8J

He’s lying. I was sent to the #COVID19 isolation ward room in a major hospital ER from a separate urgent care facility after showing UNBEARABLY PAINFUL symptoms. The hospital couldn’t test me for #coronavirus because of CDC (Pence task force) restrictions. #TESTTESTTEST https://t.co/18fRiOBsdN pic.twitter.com/0sU9fHu4r0 Congratulations to Prime Minister Abe of Japan, and the IOC, on their very wise decision to present the Olympics in 2021. It will be a great success, and I look forward to being there!

WOW: NY Gov Cuomo updated an executive order Monday to block pharmacists from filling prescriptions for the drug hydroxychloroquine for any uses not approved by the FDA.

That means this NY doctor who successfully treated 350 patients w/ COVID19 can no longer prescribe the drug. https://t.co/74gHjPo3wy 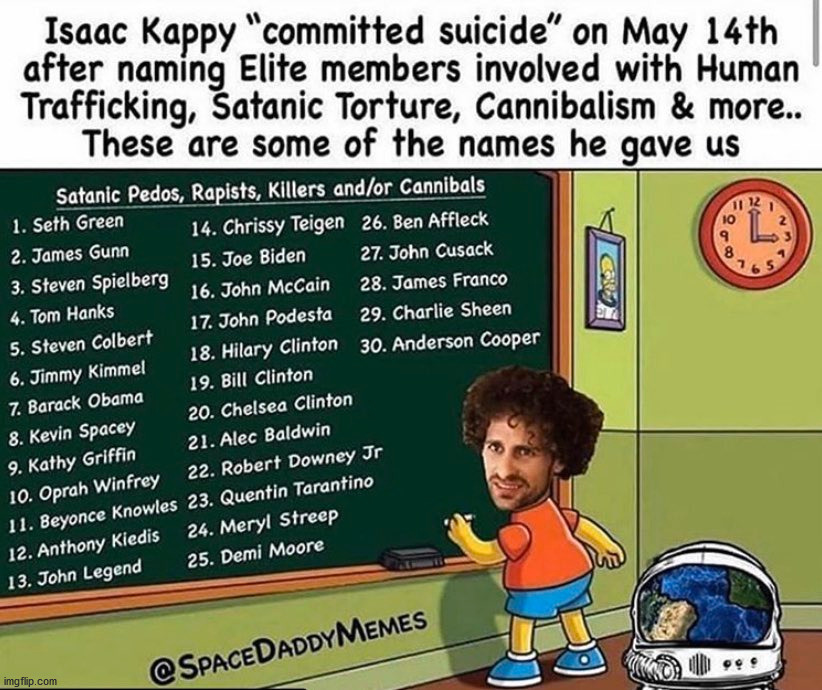 Royals on lockdown! (Castle Lock) ::: European monarchs and their heirs lead by example and work from home as people are urged to stay inside to curb the spread of coronavirus https://t.co/OEW5ifQIXW via @Femail

Fired, unable to even search for job

Prominent Ohio lawyer Michael Mearan, 74, arrested by dozens of FBI and SWAT, after raiding his home for allegedly directing a sex trafficking ring that left one woman dead and five missing https://t.co/norrA1Pu01

“As Coronavirus Sweeps The Nation, Americans Come Through With Endless Acts Of Kindness” https://t.co/Bh1dksDRYk

1While Apollos was at Corinth, Paul took the road through the interior and arrived at Ephesus. There he found some disciples 2and asked them, “Did you receive the Holy Spirit when19:2 Or after you believed?”

They answered, “No, we have not even heard that there is a Holy Spirit.”

3So Paul asked, “Then what baptism did you receive?”

4Paul said, “John’s baptism was a baptism of repentance. He told the people to believe in the one coming after him, that is, in Jesus.” 5On hearing this, they were baptized in the name of the Lord Jesus. 6When Paul placed his hands on them, the Holy Spirit came on them, and they spoke in tongues19:6 Or other languages and prophesied. 7There were about twelve men in all.

8Paul entered the synagogue and spoke boldly there for three months, arguing persuasively about the kingdom of God. 9But some of them became obstinate they refused to believe and publicly maligned the Way. So Paul left them. He took the disciples with him and had discussions daily in the lecture hall of Tyrannus. 10This went on for two years, so that all the Jews and Greeks who lived in the province of Asia heard the word of the Lord.

11God did extraordinary miracles through Paul, 12so that even handkerchiefs and aprons that had touched him were taken to the sick, and their illnesses were cured and the evil spirits left them.

13Some Jews who went around driving out evil spirits tried to invoke the name of the Lord Jesus over those who were demon-possessed. They would say, “In the name of the Jesus whom Paul preaches, I command you to come out.” 14Seven sons of Sceva, a Jewish chief priest, were doing this. 15One day the evil spirit answered them, “Jesus I know, and Paul I know about, but who are you?” 16Then the man who had the evil spirit jumped on them and overpowered them all. He gave them such a beating that they ran out of the house naked and bleeding.

17When this became known to the Jews and Greeks living in Ephesus, they were all seized with fear, and the name of the Lord Jesus was held in high honor. 18Many of those who believed now came and openly confessed what they had done. 19A number who had practiced sorcery brought their scrolls together and burned them publicly. When they calculated the value of the scrolls, the total came to fifty thousand drachmas.19:19 A drachma was a silver coin worth about a day’s wages.  20In this way the word of the Lord spread widely and grew in power.

21After all this had happened, Paul decided19:21 Or decided in the Spirit to go to Jerusalem, passing through Macedonia and Achaia. “After I have been there,” he said, “I must visit Rome also.” 22He sent two of his helpers, Timothy and Erastus, to Macedonia, while he stayed in the province of Asia a little longer.

The Riot in Ephesus

23About that time there arose a great disturbance about the Way. 24A silversmith named Demetrius, who made silver shrines of Artemis, brought in a lot of business for the craftsmen there. 25He called them together, along with the workers in related trades, and said: “You know, my friends, that we receive a good income from this business. 26And you see and hear how this fellow Paul has convinced and led astray large numbers of people here in Ephesus and in practically the whole province of Asia. He says that gods made by human hands are no gods at all. 27There is danger not only that our trade will lose its good name, but also that the temple of the great goddess Artemis will be discredited and the goddess herself, who is worshiped throughout the province of Asia and the world, will be robbed of her divine majesty.”

28When they heard this, they were furious and began shouting: “Great is Artemis of the Ephesians!” 29Soon the whole city was in an uproar. The people seized Gaius and Aristarchus, Paul’s traveling companions from Macedonia, and all of them rushed into the theater together. 30Paul wanted to appear before the crowd, but the disciples would not let him. 31Even some of the officials of the province, friends of Paul, sent him a message begging him not to venture into the theater.

32The assembly was in confusion: Some were shouting one thing, some another. Most of the people did not even know why they were there. 33The Jews in the crowd pushed Alexander to the front, and they shouted instructions to him. He motioned for silence in order to make a defense before the people. 34But when they realized he was a Jew, they all shouted in unison for about two hours: “Great is Artemis of the Ephesians!”

35The city clerk quieted the crowd and said: “Fellow Ephesians, doesn’t all the world know that the city of Ephesus is the guardian of the temple of the great Artemis and of her image, which fell from heaven? 36Therefore, since these facts are undeniable, you ought to calm down and not do anything rash. 37You have brought these men here, though they have neither robbed temples nor blasphemed our goddess. 38If, then, Demetrius and his fellow craftsmen have a grievance against anybody, the courts are open and there are proconsuls. They can press charges. 39If there is anything further you want to bring up, it must be settled in a legal assembly. 40As it is, we are in danger of being charged with rioting because of what happened today. In that case we would not be able to account for this commotion, since there is no reason for it.” 41After he had said this, he dismissed the assembly.