Solar Powered and can be used to charge your phone! Purchase The Best Flashlight On The Market! Use “Blessed20” in the Coupon code to save 20%! Click Here! http://www.patriotflashlight.com\

Today I’m releasing the remaining interview transcripts from @JudiciaryGOP’s investigation into decisions made at the Department of Justice and FBI. To read the transcripts, visit https://t.co/EcAYT7JPdA. pic.twitter.com/kYy9YKSIZI

SB2 DeCode: Barr is about to drop THE HAMMER.

British spy chiefs were briefed on Christopher Steele’s dossier before Donald Trump knew of its existence.

Heads of MI5, MI6 + one of Theresa May’s most trusted security advisers all knew of the Russian links claims before Trump. 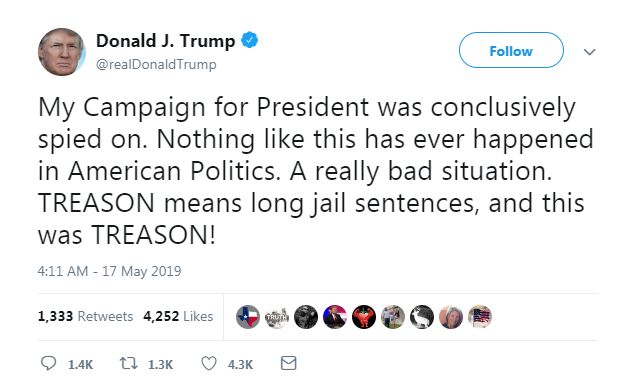 The Traitor Politicians Did This to Us

Q posts are few and far between because Anons are researching and providing the news. The training wheels have been removed.

Mark Meadows: ‘Declassification is right around the corner’

Biden 1994: "I have consistently voted against federal funding of abortions"

Biden 2007: "I will not allow cities to ignore federal immigration law"

If Iran wants to fight, that will be the official end of Iran. Never threaten the United States again!