In light of the attack from the Invisible Enemy, as well as the need to protect the jobs of our GREAT American Citizens, I will be signing an Executive Order to temporarily suspend immigration into the United States!

In light of the attack from the Invisible Enemy, as well as the need to protect the jobs of our GREAT American Citizens, I will be signing an Executive Order to temporarily suspend immigration into the United States!

I’ve had great “ratings” my whole life, there’s nothing unusual about that for me. The White House News Conference ratings are “through the roof”(Monday Night Football, Bachelor Finale , @nytimes) but I don’t care about that. I care about going around the Fake News to the PEOPLE!

Every article I am reading today is HATING on #Hydroxychloroquine – an FDA APPROVED drug.

P.S., The FDA also approved this for use to treat COVID-19.

But the #Media claims it is just "an anti-malaria drug Trump 'touts' as a cure." 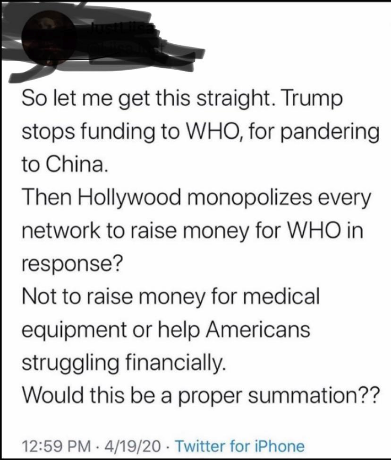 AG Barr: “Constitutional Rights Do Not Go Away During an Emergency”

The PETRO dollar was designed to fail. Team @POTUS has capitalized on the failure to build a parallel sovereign economic system.

We are in transition… two economies, one dying and a new one rising.

OIL will no longer be a currency or tool of war.